Farmers who often commute on rural roads are too familiar with the dangers that sharp bends present drivers. It is easy to underestimate the severity of a curve on the road ahead, and many drivers consequently take them too quickly.

The appropriate technique to follow when driving on winding roads is to slow your car down before the bend to a speed that would allow you to stop if someone on something unexpectedly appears as you turn a blind corner.

If you continue to break as you enter a bend, then you are not in full control of your vehicle and you’re going too fast.

Try your best to look forward and determine where the road ahead is going by using tree lines, hedges or telephone poles.

Drivers who normally commute in urban areas might be accustomed to driving at the speed limit.

With many rural roads carrying speed limits above 50mph, these drivers may feel they should be driving at these speeds or speeds even higher.

Contrary to that belief, rural roads contain different hazards than city roads – sharp turns, unanticipated hazards and changing conditions can catch even the most experienced driver off guard.

Therefore, it is more important to determine your speed based off of the specific conditions of the rural road you are on, rather than the speed limit that is posted.

During summer when plants are growing at their fastest rate, crops can be very tall and overgrown. Such crops can make it difficult to clearly see the curving road ahead or the opposite side of an intersection.

If you are unfamiliar with the road you are on and crops are overgrown, reduce your speed, approach intersections slowly, and always look twice!

It’s no surprise that wildlife is more common on rural roads. It is important to keep an eye out for animal crossing signs when driving through the countryside.

Many drivers tend to swerve in order to avoid collisions with wildlife, but this is actually more dangerous than colliding with the animal. A broken headlight or dented fender is better than a serious accident caused by losing control of your car.

If you happen to notice wildlife on the road from afar, attempt to slow down and blast your horn enough to startle them off of the road.

It is often necessary for farmers to drive their tractors and other machinery on rural roads, which can be frustrating for some car drivers caught in line.

However, most tractors are not travelling a very long distance so drivers won’t have to wait too long for the road to clear up again.

If you decide to pass farm equipment, make absolutely sure the road ahead is clear – oncoming traffic can be obscured by the tractor, overgrown crops or the crest of a hill.

Also, be aware of any junctions ahead where other drivers may pull out from.

Some tractors might need to swing out to the left before turning right due to their size. Drivers should always leave enough room for farmers to do so and consider this before deciding to pass.

Whether driving in the city or in a rural countryside, drivers should always prepare for the unexpected. Learn more about our Auto Insurance to achieve true piece of mind on any journey you take.

What You Need in Your Winter Car Survival Kit

Winter weather puts drivers at an increased risk of being in an accident or becoming stranded. Emergencies can happen to anyone. Whether you slip off a snowy road or fall victim to a dead battery, a car emergency kit can get you back on route quickly and safely. 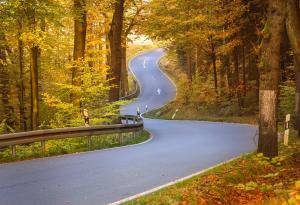 Farmers who often commute on rural roads are too familiar with the dangers that sharp bends present drivers. It is easy to underestimate the severity of a curve on the road ahead, and many drivers consequently take them too quickly.