How Many Smoke Detectors Should I Have in My Home?

How Many Smoke Detectors Should I Have in My Home?

When it comes to protecting yourself and your loved ones, preparation is key. Smoke alarms are your first line of defense against a home fire, notifying your family with a timely alert allowing everyone to escape safely.

Every home is different, meaning the number of smoke alarms along with where they are placed varies from household to household. This quick guide will help you determine where smoke alarms should be placed in your home:

How Many Smoke Alarms Do I Need?

The National Fire Protection Association (NFPA) states that smoke alarms should be installed on each level of your home, including the basement, and installed inside of every bedroom and outside of each sleeping area.

There is no such thing as having too many smoke alarms in your home! Just make sure they are properly placed in each area.

Where Should I Place My Smoke Alarms?

Believe it or not, there is a right way and a wrong way to install smoke alarms. For example, in your kitchen, battery operated smoke detectors should be installed at least 10 feet away from cooking appliances to minimize the number of false alarms.

Smoke rises, so smoke alarms should be placed high on walls or ceilings. If you are installing a battery operated smoke alarm on a wall, make sure the top of the alarm is not more than 12 inches from the ceiling.

Never install smoke alarms too close to vents or windows as smoke could dissipate through these openings before setting off your smoke alarm.

What Types of Smoke Alarms Should I Install?

You really have no way of knowing what type of fire you might have, which is why the USFA recommends the installation of both ionization and photoelectric alarms. There are some alarms on the market that come equipped with both types of sensors in one alarm, which is what we recommend.

Smoke alarms can either be battery-powered or hardwired into your home’s electrical system with backup batteries in case you lose power.

Hardwired alarms are generally recommended by experts because they don’t depend on a battery, they are often installed to be interconnected with other smoke alarms, and they don’t require as much maintenance. These usually need to be installed by a professional. If a battery operated smoke alarm is selected, you will need to remember to replace the batteries once or twice a year.

As mentioned above, smoke alarms can be linked so that all of them will go off if one is triggered. This is an important feature for multi-level homes where you may be unable to hear the alarm in a far corner of the house. If you don’t have hardwired alarms, there are Bluetooth options available for battery operated alarms.

Being able to silence an alarm with a button is much better than disabling the unit—since then you decrease your chances of forgetting to put the batteries back in the unit. The silence button is a temporary measure and the alarm will sound again if whatever triggered it persists.

Some smoke alarms have one silencing button while others have two—one for a false alarm and one for a low-battery warning. The low-battery warning can be silenced for longer stretches of time than the regular alarm, but it varies from model to model.

This option is ideal for individuals who are hearing-impaired, the alarm will display a flashing light when triggered.

Some smoke alarms also act as CO detectors, which are another important part of your home’s overall safety. Having a digital display of the CO levels, even when the concentrations are below the level that triggers the alarm, is extremely helpful, though not necessary for a product to be considered safe. Some CO detectors also show the peak CO level since the last reset, which lets you know if there were any spikes while you were away from the house or sleeping.

Bottom line, it’s up to you to implement this vital safety measure in your home. Regardless of the brand you select, having multiple working smoke alarms throughout your home will increase your family’s overall security.

Smoke detectors help prevent a fire, homeowners insurance helps you recover from one: 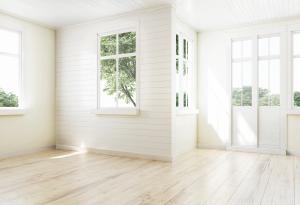 10 Tips to Keep Your Vacant Home Safe After Moving

Sometimes your home may be on the market for days, weeks or months before new homeowners settle in. During that time, your home could fall victim to vandalism, burglary, the elements, system failure or a variety of other costly issues. Make sure you protect your vacant home with these tips: 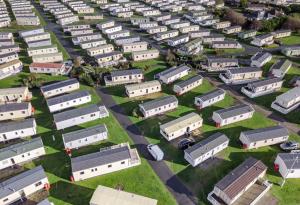 Manufactured homes have become a more popular living option over time instead of buying a standard home or renting.