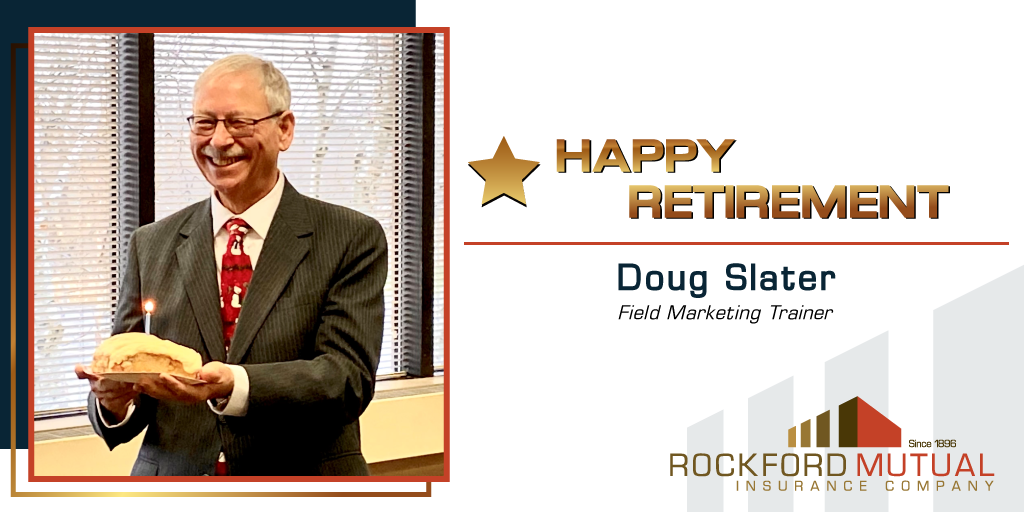 Reaching the end of 2020 is nothing short of bittersweet for our Field Marketing Trainer, Doug Slater. Despite the uncertainty surrounding 2020 and the COVID-19 pandemic, one thing remained certain for Doug – January 1, 2021 would bring a fresh new year and a long-awaited retirement!

Doug attended Iowa State University from 1968-71 where he earned his BS in Mathematics with minors in Physics, Education and Chemistry. Doug spent a total of 47 years building his expertise in the insurance industry, and even started his very own captive agency from scratch for John Deere Insurance out of Waterloo, IA, Slater Insurance Agency (1981-82). Doug had held a variety of positions throughout his years, from Senior Underwriter to Regional Manager. He earned his CPCU in 1991, his CIC in 2012, and his AFIS in 2012.

“Doug has been an integral part of Rockford Mutual and it’s development into a respected insurance carrier throughout Illinois, Wisconsin, and Indiana,” says Shane Heeren, VP – Marketing/Sales, “We are very fortunate to have had Doug share his knowledge and expertise over the last 11 years with Rockford Mutual.  He will be missed but we wish him all the best in his retirement.”

In his retirement, Doug plans on traveling to visit any National Parks he has not yet seen and incorporate visits with friends and relatives along the way. He is looking forward to his retirement gift to himself, a 16-day safari to Tanzania and Kenya in November of 2021! We thank Doug for the 11 years he has spent with Rockford Mutual, and we wish him the best in his retirement!